The COVID-19 pandemic has placed a strain on industries like entertainment, dining, events, tourism, and more. And without adequate government relief, businesses have been forced to close, owners have had to make staffing cuts, and millions have found themselves out of work.

As a result, rent strikes have cropped up in many cities, even sparking a nationwide #CancelRent movement. These strikes were organized by a coalition of those who can’t or refuse to pay rent, in an effort to coerce the government to extend eviction moratoriums and pass more pandemic relief.

However, tenant strikes can be a divisive topic. To get a better read on where people stand on tenant strikes, we asked Americans what they would do if they had the opportunity to join the movement.

Here’s what we learned.

We asked two sets of 1,500 Americans one survey question each. Both came to the same conclusion: Between 25% and 30% of Americans would be willing to join a rent strike.

In our first survey, we asked under what circumstances, if any, respondents would be willing to stop paying their rent as a form of protest. 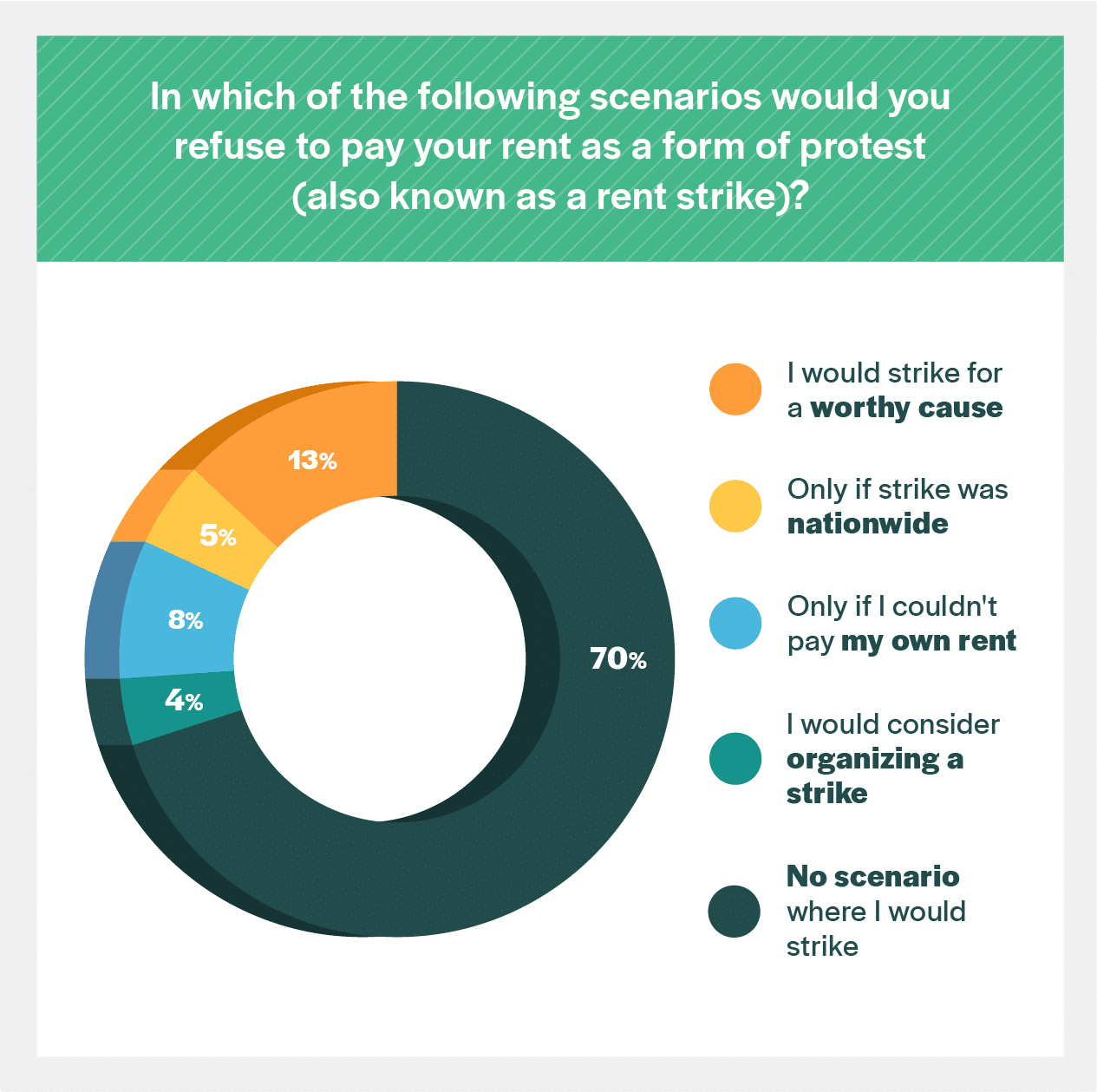 Our second question approached the topic from a different perspective, asking whether respondents would join a rent strike in their own community. 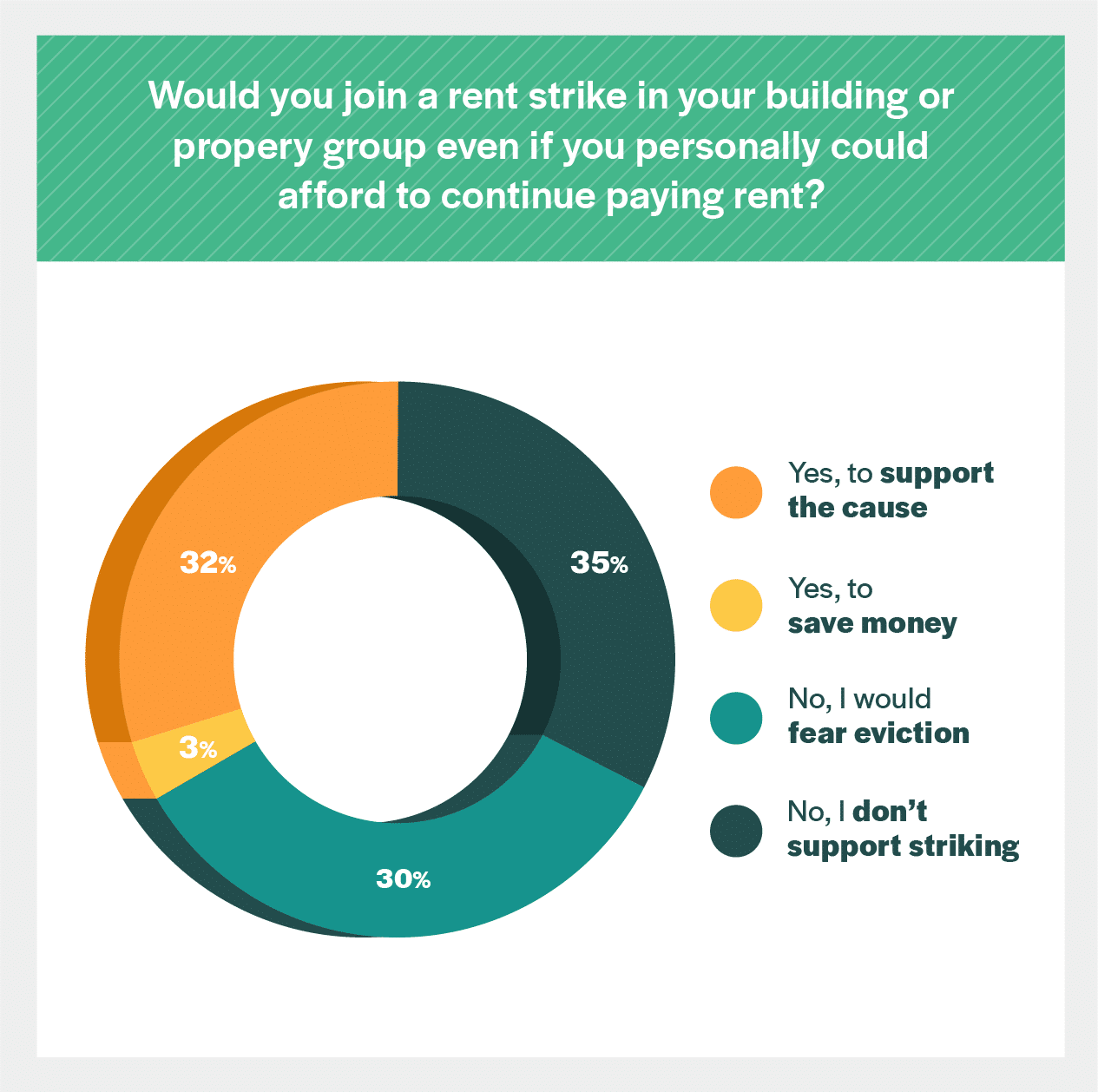 Since respondents had the option to say explicitly that they are anti-strike, it’s reasonable to assume non-strikers who chose the “fear of eviction” response are not anti-strike. So although both survey questions indicate that between 65% and 70% of Americans would not join a strike, the number of Americans against tenant strikes is actually much lower — closer to 35%.

It comes as no surprise that support for tenant strikes was highest among young people and decreased as age increased. However, even in the oldest age range, the number of strike supporters wasn’t as low as one might think. 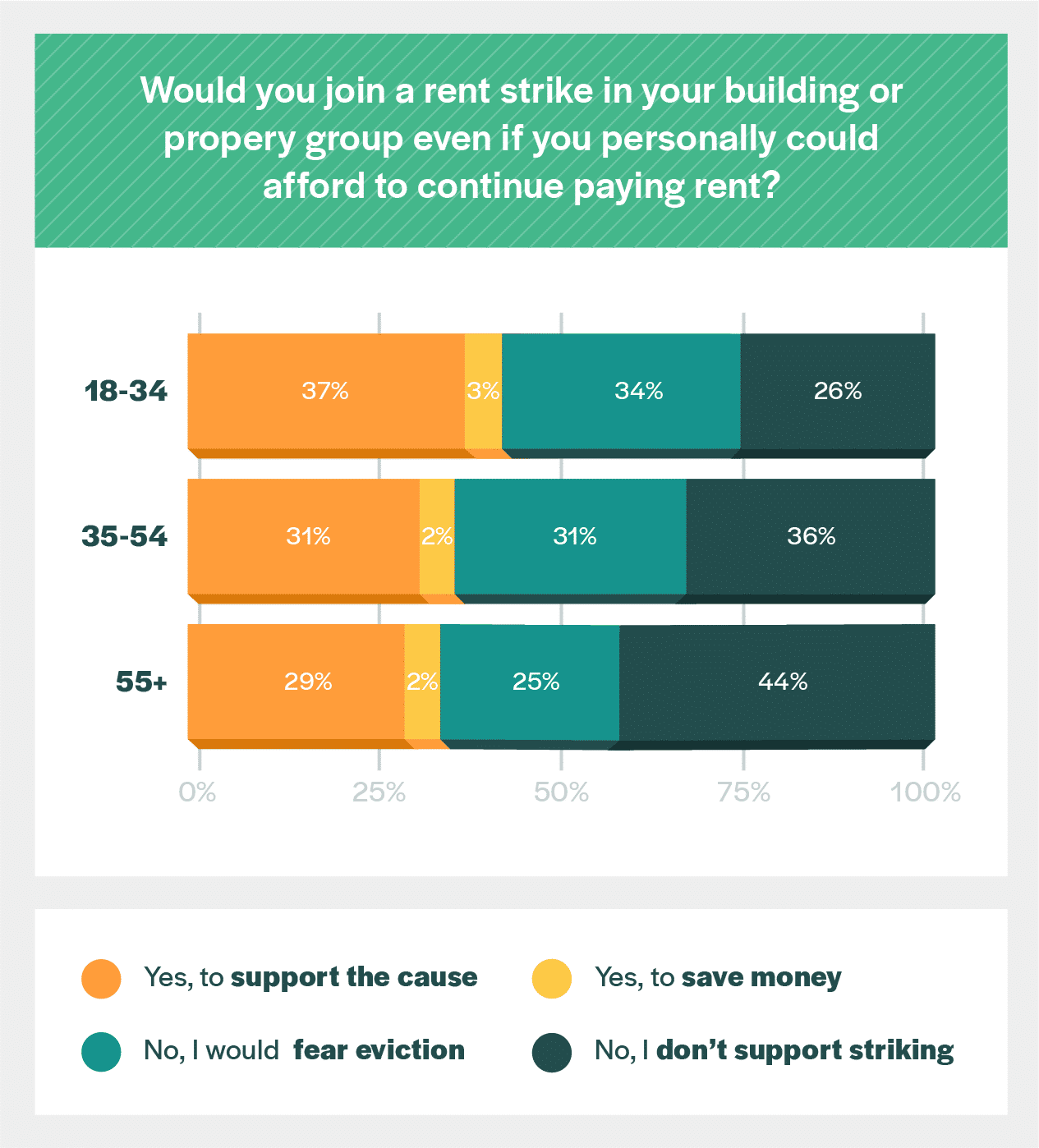 However, only 44% of those ages 55+ said they are explicitly anti-strike. Another 25% said fear of eviction is what would prevent them from participating in a strike, meaning the number of potential strike supporters in the 55+ group could be as high as 56% (more than half). 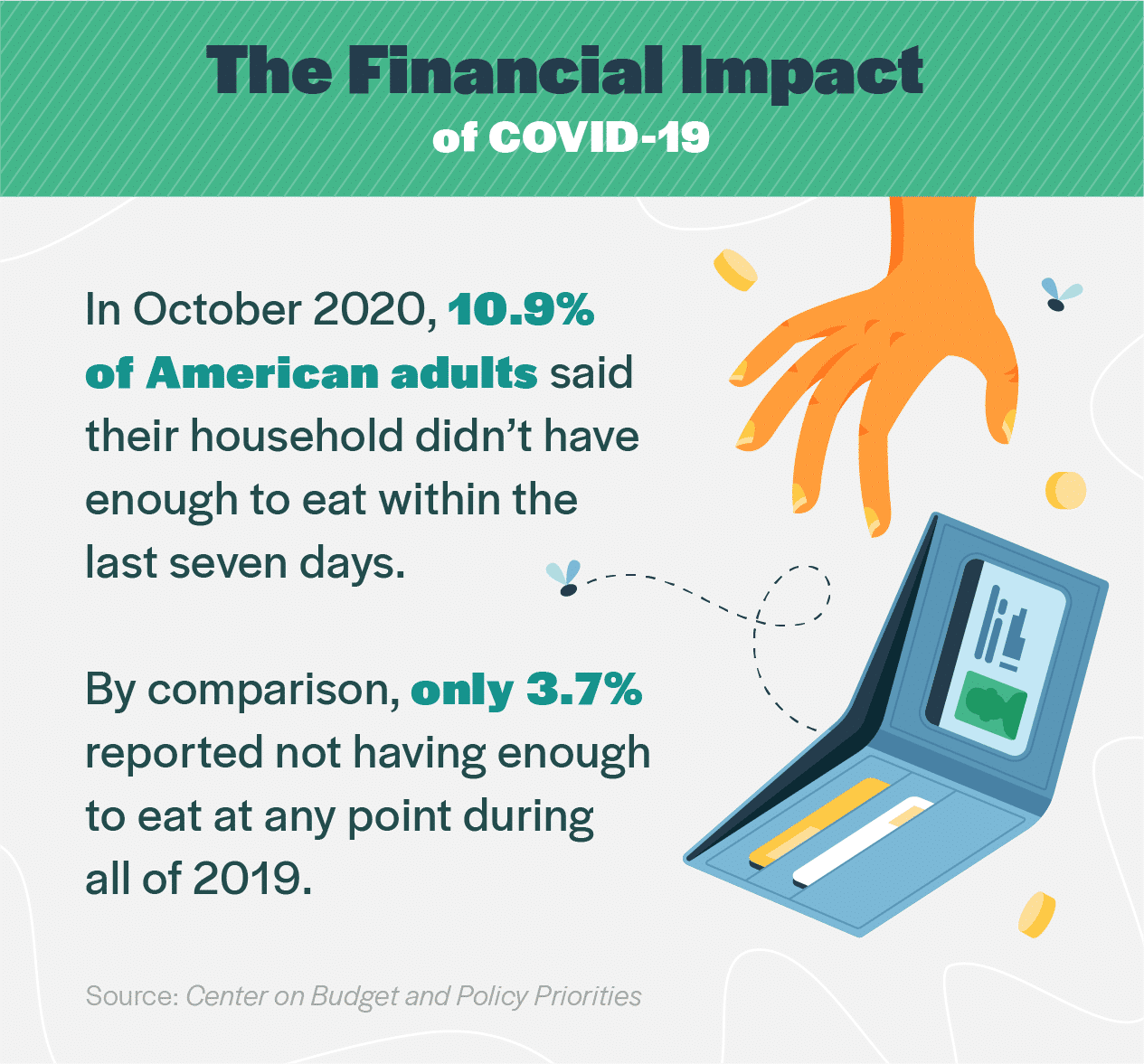 How to Organize, Join, or Support a Rent Strike

This data paints an optimistic picture for tenant strikers. A strong one-third of Americans are  willing to join a strike, and another 30% are potentially willing to support a tenant movement in other ways.

Whether you’re part of a tenant strike, considering organizing a strike, or looking for ways to stand with tenant strikers, here’s what you need to know.

How to Organize or Join a Rent Strike

The rent strikes currently in the news are much different than the standard rent strike scenario, in which tenants withhold rent to force a landlord’s hand with regard to how they manage a property.

For example, if a landlord routinely neglects to maintain a building or eliminate hazards from the property, tenants can strike to force the landlord to uphold their end of the lease agreement.

If you’re participating in a local rent strike, first research landlord-tenant laws in your municipality. While failure to pay rent would typically be considered a breach of your lease contract (making you subject to eviction), many courts view rent strikes differently from a standard failure to pay rent. Many jurisdictions have developed procedures that allow the tenant to pay rent directly to the court, which withholds it until the landlord provides sufficient evidence that they have corrected the situation, such as by making necessary repairs.

To find information on tenant rights and your local landlord-tenant laws, check out these resources:

Tenant strikes related to lack of pandemic relief are different from local strikes because there’s nothing the landlord or property owner can do to satisfy the tenants’ demands.

For this reason, an individual or family owns your property, it’s best to work with your landlord directly to determine a path forward that’s least damaging for all involved. For example, the CARES Act allowed many property owners to place their mortgages in forbearance during the pandemic; these owners would likely have more flexibility to postpone or reduce rent temporarily.

If you ultimately decide a rent strike is your best option: 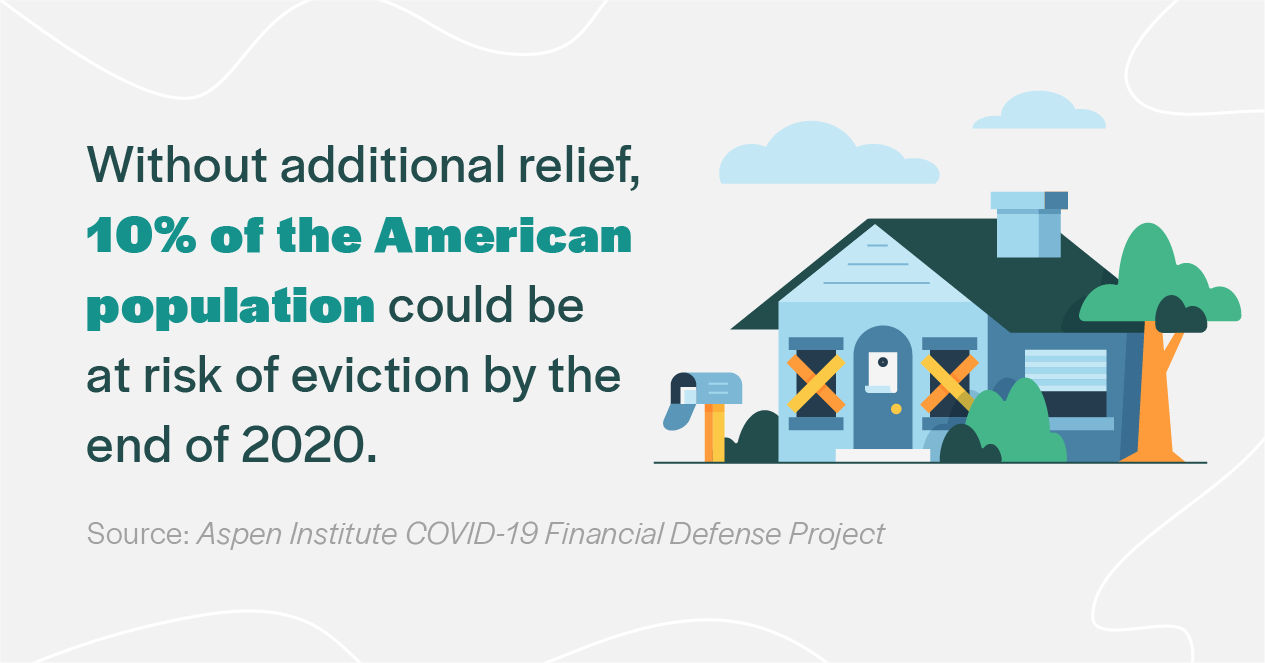 How to Support a Rent Strike

There are still plenty of ways to support tenants without personally striking. The best option is to find your local tenant union and ask what they need, whether it’s campaign assistance, fundraising help, or protest participation.

Here are some resources on how to support nationwide tenants rights organizations:

Whether you’re personally considering a rent strike or you’re totally removed from tenants’ rights issues, housing equality is an issue of national interest everyone should know at least a little bit about — especially during the COVID-19 pandemic. Like racial injustice, income inequality, education access, and public health issues, housing justice is an issue all Americans should be aware of so they can be educated voters and engaged citizens.

This study was conducted for Money Crashers using Google Consumer Surveys. The sample consisted of no less than 1,500 completed responses per question. Post-stratification weighting has been applied to ensure an accurate and reliable representation of the total population. The survey was conducted in October 2020.

Amanda Pell
Amanda is a writer and content strategist who built her career writing on campaigns for brands like Nature Valley, Disney, and the NFL. She now specializes in personal finance and wealth management content, covering everything from retirement strategies to estate planning to credit card bonuses and beyond. When she's not knee-deep in trends research, you'll likely find her hiking with her dog or with her nose in a good book.