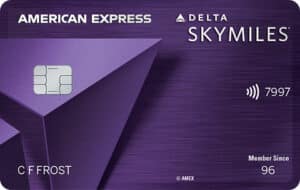 The Delta SkyMiles® Reserve American Express Card is an airline credit card with an incredibly generous rewards program that favors frequent Delta flyers seeking to earn Medallion status and travel in luxury while doing it.

This card is a great travel rewards credit card, but it doesn’t come cheap. It has an annual fee of $550, charged from the first year onward. If you’re interested in this card, you need to make sure you use it and its perks often enough – and take to their air with Delta frequently enough – to offset its hefty cost.

These are the key features of the Delta SkyMiles Reserve card. They include generous Delta Medallion benefits, complimentary Delta Sky Club and Centurion Lounge access for the primary cardholder, a complimentary companion airfare certificate, and other choice perks.

This card earns 3 Delta SkyMiles for every $1 spent on Delta purchases (including airfare, lounge passes, in-flight purchases, and other incidental expenditures). All other purchases earn 1 SkyMile per $1 spent, with one exception.

You can redeem your SkyMiles for Delta airfare at variable redemption thresholds. Delta’s redemption requirements are subject to change over time, and certain travel times, dates, and destinations (such as high-season flights to popular vacation destinations) are sure to demand additional SkyMiles.

Delta’s Pay With Miles feature lets you redeem SkyMiles for part of a flight at a flat $0.01-per-point ratio, and then cover the rest of the published fare with cash. For instance, a 10,000-SkyMile Pay With Miles redemption equates to a $100 fare reduction, regardless of route or published fare price.

When you renew your card at your annual renewal date, you get 1 companion certificate that can be redeemed for 1 domestic first class or economy round-trip flight. The designated companion using the certificate needs to be traveling with the primary cardholder. The cardholder is required to purchase his or her ticket, as well as pay any government taxes and fees on the companion fare, with their Delta SkyMiles Reserve credit card.

When you spend at least $30,000 on your card (in total purchases) in a calendar year, you receive 15,000 bonus Medallion Qualification Miles. You can earn this benefit up to 4 times each year, for a total of 60,000 bonus MQMs per calendar year.

When you spend at least $25,000 in a calendar year with your Reserve card, you no longer have to worry about earning enough MQDs to qualify for a given Medallion status level. Instead, MQMs or MQSs are sufficient. For instance, if you accumulate the 75,000 MQMs necessary for Platinum status, you don’t need the $9,000 MQDs that are normally also required.

Enjoy a waiver of your Global Entry or TSA PreCheck application fee (payable as a statement credit) with this card.

In addition to generous perks such as the annual companion certificate and complimentary Sky Club and Centurion Lounge access, Delta SkyMiles Reserve has some useful fringe benefits for Delta travelers: 20% off all in-flight purchases, priority boarding, and 1 free checked bag for the cardholder.

There is a $550 annual fee, starting in the first year. There is no foreign transaction fee. Balance transfers and cash advances both cost the greater of $5 or 3%.

This card’s drawbacks include its high annual fee and authorized user fee, mediocre rewards on most non-Delta spending, and limitations on SkyMiles redemption.

Delta is a huge airline that serves virtually every major U.S. city and (either directly or through affiliates) dozens of international destinations. It’s likely that you live within easy driving distance of a Delta airport, even if you don’t consider your hometown a Delta hub. If you do, you’re part of Delta SkyMiles Reserve’s target audience – at least in theory.

In practice, however, the Delta SkyMiles® Reserve American Express Card is only appropriate for a small sliver of U.S. consumers: Frequent travelers who can (and wish to) remain loyal to Delta, and who have the ample means and stellar credit to handle this beast of a credit card. If you do not fit the bill, don’t fret – many travel credit cards are less lavish and less expensive, but still plenty generous.

The Delta SkyMiles® Reserve American Express Card is an extremely generous credit card meant for frequent, heavy-spending Delta flyers seeking the tremendous benefits afforded to residents of the Medallion program’s upper echelons. Cardholders who spend at least $30,000 (preferably $60,000 or more) per year and take ample advantage of the complimentary Sky Club access benefit can easily get their money’s worth out of this card (and then some).

On the other hand, travelers who can’t string together sufficient SkyMiles, MQMs, and cardholder benefits to offset the eye-popping $550 annual fee are better off with a cheaper, less generous travel rewards card.