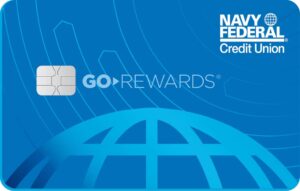 How Do You Get the NFCU GO REWARDS Credit Card?

The NFCU GO REWARDS Credit Card is reserved for:

Translation: This card is not available to members of the general public. If you’re not keen on joining the military, haven’t served in the past, and don’t know anyone who is or has, you need to look for another rewards credit card.

Those who do meet NFCU’s qualifications can expect an above-average credit card experience with GO Rewards. With almost no fees, a solid introductory balance transfer promotion, and a nice fringe benefit lineup for Visa Signature cardholders, NFCU GO Rewards Credit Card is worth considering alongside better-known options.

Let’s dive a little deeper into what you can expect from this card.

The NFCU GO REWARDS Credit Card earns points on all eligible purchases and bonus points (up to 3x) on restaurant and gas purchases. You can redeem those points for cash, gift cards, travel, and merchandise.

There’s no limit to how much you can earn with your NFCU GO REWARDS Credit Card, and points never expire once they’re earned. There’s also no annual fee, foreign transaction fee, balance transfer fee, or cash advance fee.

All in all, NFCU GO REWARDS is a nice little credit card — if you can get it.

If you think you’re eligible for NFCU membership, joining is easy. You will need to provide proof of eligibility, answering basic questions about your military service status or relation to a service member.

Here’s where you’d specify which branch of the military you currently or previously served with, for example:

Once you get past the questions — which shouldn’t take more than a few minutes — you’ll need to create your Membership Savings Account, deposit $5, and then apply for whichever NFCU financial account you’re most interested in. (Probably the NFCU GO REWARDS Credit Card, if you’re still reading this.)

That part of the process is a lot like applying for any other bank or credit card account. You’ll need to provide the following information and complete an application, sacrificing another few minutes of your time.

You don’t have to apply for any NFCU account other than the Membership Savings Account right away. If you’d like to spend a few months working on your credit before circling back to apply for a GO REWARDS card, have at it.

Back to the card at hand. The NFCU GO REWARDS card ranks highly in our eyes for three reasons:

Here’s what you should know about the NFCU GO REWARDS card before you apply (if you decide to at all).

There are no caps or restrictions on the total number of points you can earn.

Points can be redeemed for a variety of items, including cash back via statement credits or direct deposits, gift cards to major retailers such as Amazon and Target, travel purchases made through a proprietary booking portal, merchandise (including new electronics), and special experiences such as spa treatments.

The minimum redemption threshold is 1,000 points, though certain items require more points. Points are generally worth $0.007 to $0.01 apiece, but this value can vary slightly depending on the redemption option. For example, points can be worth less when redeemed for merchandise or experiences. Points expire four years after they’re earned, so it’s important for occasional users to redeem them periodically.

This card comes with a 1.99% APR for 6 months on eligible purchases. That’s not category-leading by any stretch — the best intro purchase promotions last for 18 months or longer — but it’s enough time to reduce the cost of moderate purchases you can’t cover with ordinary cash flows.

If you have adequate income and very good to excellent credit, you may be entitled to a Visa Signature version of this card. NFCU GO Rewards Visa Signature cards boast credit limits of at least $5,000 plus some valuable fringe benefits, such as complimentary loss and damage protection on rental cars charged in full to the card, automatic fraud monitoring with real-time notifications, and cell phone damage protection.

NFCU GO Rewards Credit Card includes additional cardholder-friendly perks. The best include moderate to deep discounts on purchases at popular Visa partner merchants, such as Calvin Klein and other apparel vendors, cultural institutions like the Metropolitan Museum of Art in New York City, and travel companies such as Gray Line Tours (a favorite urban sightseeing choice for international tourists).

NFCU GO Rewards Credit Card requires good to excellent credit. If your credit history includes any notable blemishes, you may have difficulty qualifying.

These are the most compelling advantages of the NFCU GO Rewards Credit Card — the top reasons you’d want to apply for this card if you’re elgible for it.

Beyond the elephant in the room — that the NFCU GO Rewards Credit Card isn’t available to the general public — this card has a few disadvantages to weigh before applying.

How the NFCU Platinum Card Stacks Up

Not sure the NFCU GO REWARDS Card is the best fit for your day-to-day spending needs? See how it compares to another popular rewards credit card with an intro purchase promotion: the Citi Rewards+ Card.

Though you don’t have to have a U.S. Navy service record to qualify for membership with Naval Federal Credit Union, you do have to have some record of service in the Armed Forces, a civilian position at the Department of Defense, or close family ties to someone who meets either criterion.

Unfortunately, this means that most people don’t qualify for NFCU membership. After accounting for current and former members of the military, current Department of Defense employees, and their immediate family members, perhaps 15 million people (out of 330 million Americans, give or take) are technically eligible for NFCU membership.