8 Ways to Save Money on Popular Summer Vacation Ideas

11 Ways to Stay Within Your Budget When Buying a House

Investing in IPOs With 20/20 Hindsight: Catching the Big-Wave Opportunity

Imagine you’re a big-wave surfer. You’re checking weather reports, plotting your next move, and preparing to travel anywhere in the world at a moment’s notice. You might wait months for the next big swell to hit. When the storm arrives, you need to be ready.

The same is true for investing. Sure, you should be putting money away in index or mutual funds. But sometimes, it pays to take on risk. Sometimes, it’s OK to swing for the fences. The key is to make sure you don’t lose your shirt.

Risk return is a tradeoff. The higher the risk, the higher the potential reward. But even big-wave surfers take precautions to lower their risk of injury. And as an investor, you don’t want to put all your eggs in one basket.

Here’s a closer look at some of the investments that have made big waves to date and what you can learn from their examples.

Get in on the Ground Floor

If you’re hoping to make a fortune, you’ve probably considered investing in a company’s initial public offering, or IPO. IPOs are alluring. It’s the first time a private company offers equity to the public. These companies often sell products or services that have gained popularity over a short period. For some, IPOs represent the chance to invest in the next great company.

However, there are downsides to consider. Since these are young businesses, they don’t have a long track record, and many have inexperienced management teams. Not all IPOs live up to their hype. It’s a roll of the dice. Inevitably, there will be winners and losers.

High-profile startups like Uber, Spotify, and Slack have recently gone public. Will any of these generate strong returns in the future? Will they even be around 10 years from now? Only time will tell.

But what if you had been an early investor in some of today’s most iconic companies? How much money would you have?

To find out, we calculated how much an initial investment of $1,000 would have grown in different company stocks. These are companies whose brands are so ubiquitous it’s almost impossible to go a day without using one of their products or services. We assumed stock dividends were not reinvested. For consistency, we adjusted all stock prices for splits. We also included bitcoin in our analysis by tracking its value back to early 2011. 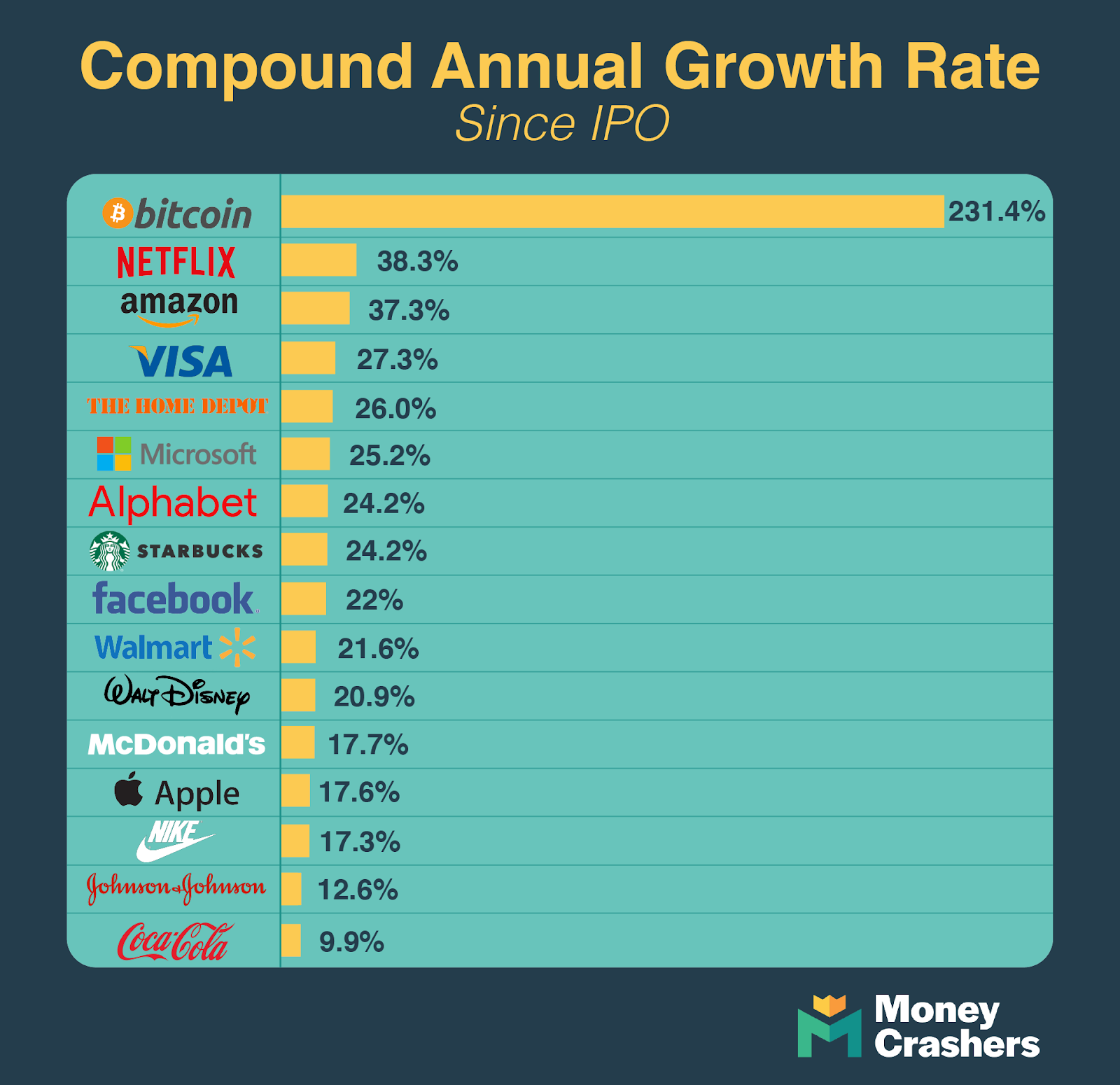 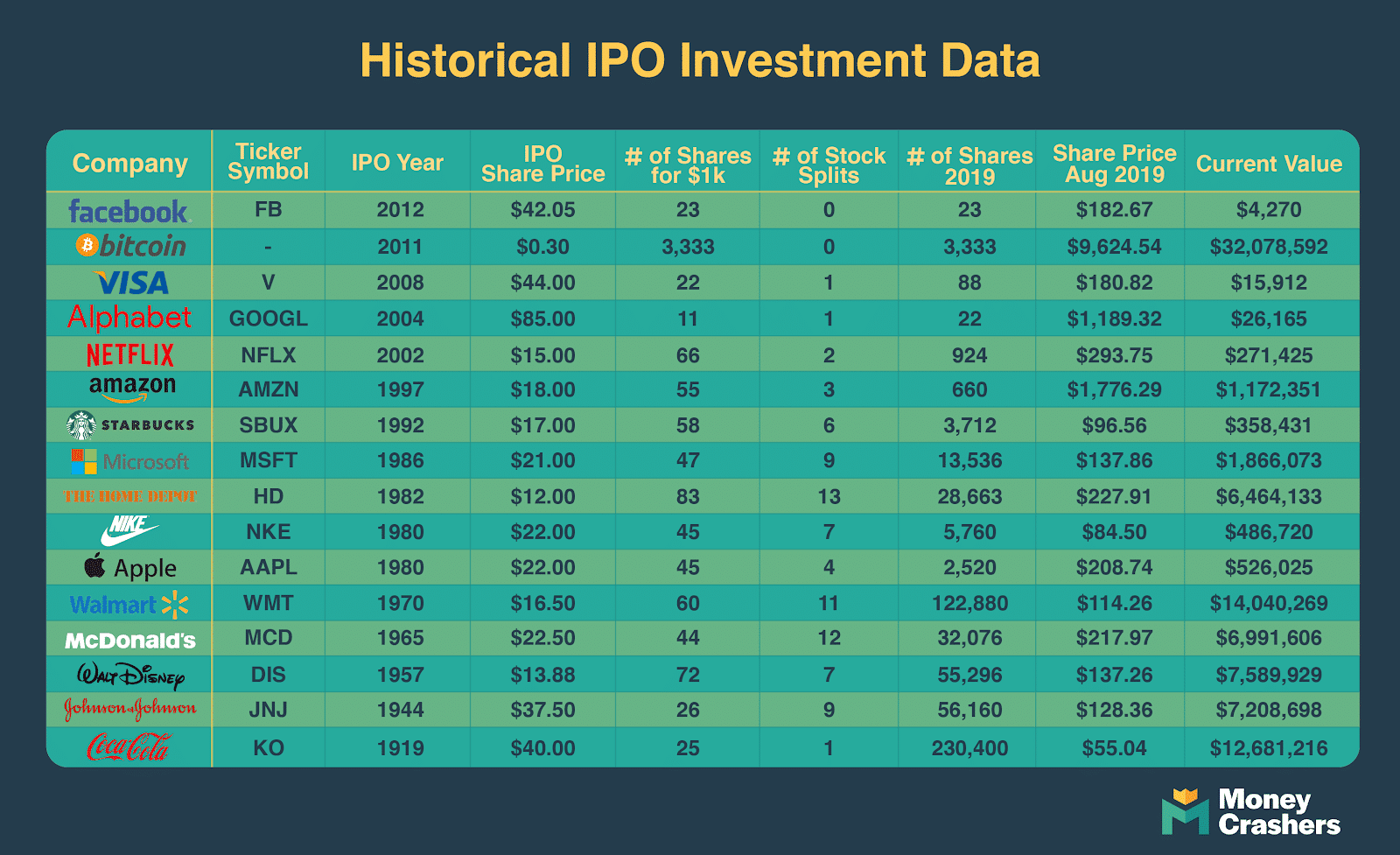 The data shows the power of time. It pays to stick with good businesses over the long term. While technology companies have the highest compound annual growth rate, the brands that have been around the longest generate the highest total return.

One thousand dollars’ worth of shares in Walt Disney in 1957 would be worth $7.6 million today. By comparison, an initial investment of $1,000 in Coca-Cola in 1919 would be worth nearly $12.7 million. And that doesn’t account for dividend reinvestments in either stock. According to a Coca-Cola proxy statement, one share of its common stock, purchased for $40 in 1919, would have been worth $9.8 million in 2012 if dividend payouts were reinvested annually. That’s a compound annual growth rate of 14.3%. If we extrapolate the projections to 2019, a person who invested $1,000 in Coca-Cola’s IPO would now have over $620 million with dividend reinvestments.

The calculations above are an interesting thought exercise, but most people didn’t have the opportunity to invest in these IPOs. Some of these businesses launched many years ago before the average person was investing or saving for retirement. For example, Johnson & Johnson went public in 1944 during World War II. Coca-Cola went public a century ago during Woodrow Wilson’s second term as president.

For most of us, 10 years is a more reasonable time horizon to consider. It’s long enough to reflect on the outcomes of recent past choices. So, what was happening 10 years ago? The most severe economic downturn since the Great Depression was crippling financial markets.

More than a decade has passed since the Great Recession. Over that time, the stock market has been on the longest streak of uninterrupted gains in American history. The S&P 500 has increased more than 350%, and the economy has expanded. And as a result, investors have made a lot of money.

But many people were nervous to risk their money when the market was tanking. Real estate assets lost their value, global markets were in free fall, and many companies went out of business. It was a troubling period, and many people pulled their money out of the market.

Warren Buffett, one of the most successful investors in history, once said:

He’s right. Hindsight is 20/20, especially when it comes to financial decisions. It’s much easier to buy low and sell high once you know the outcome. But what if you could go back in time and invest when the stock market bottomed out? How much money would you have today? 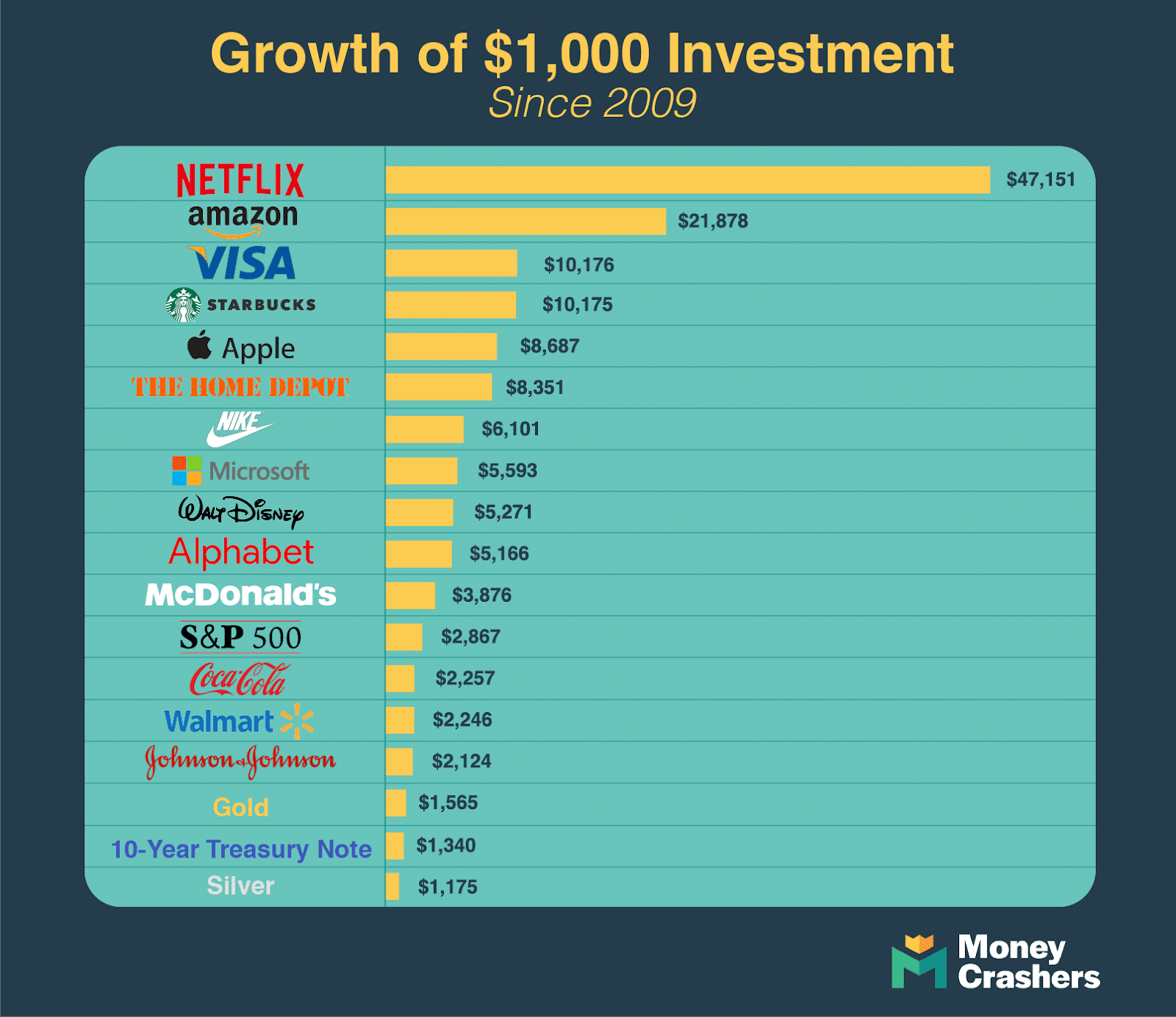 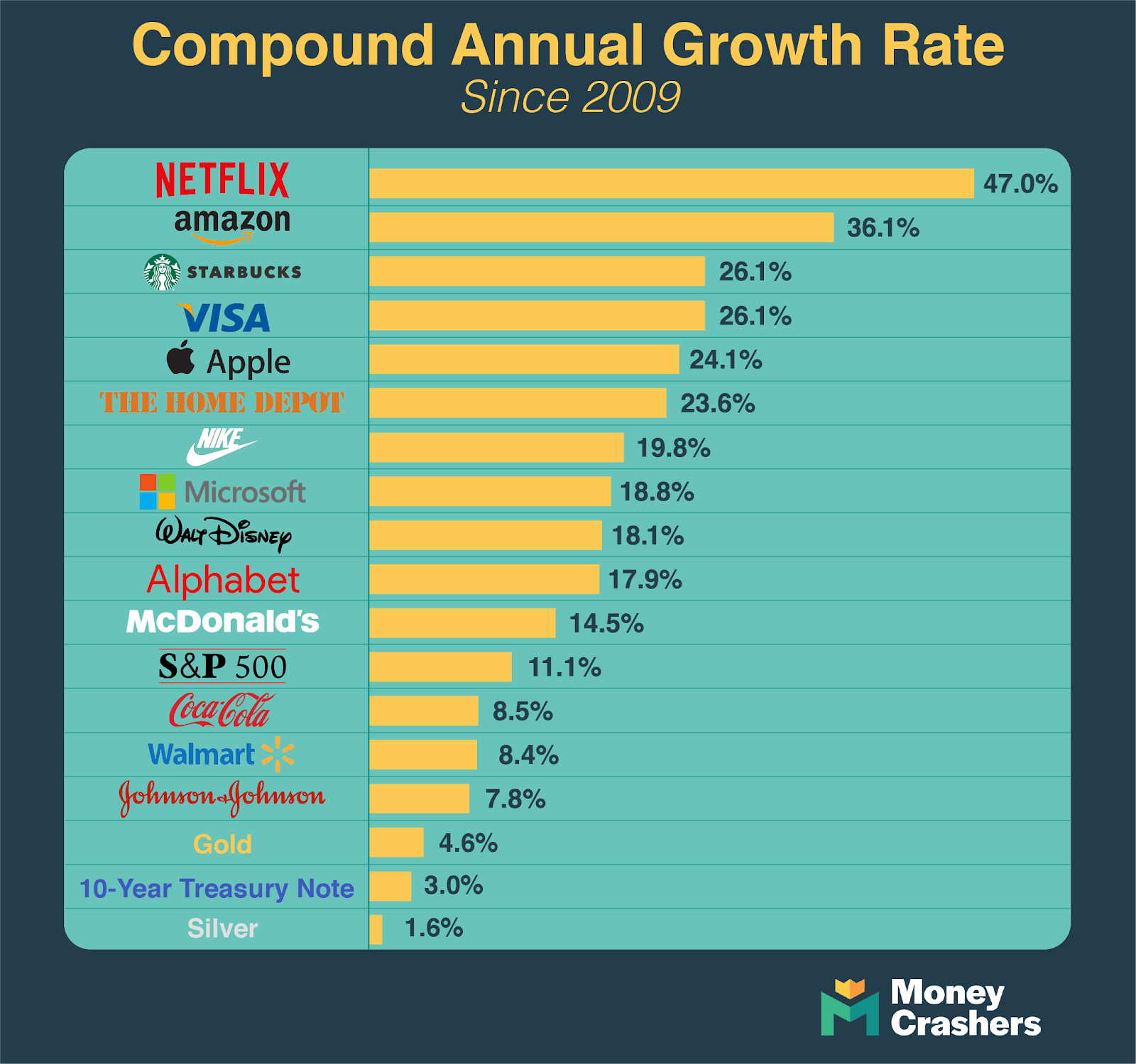 An investment in Netflix would have increased by a factor of 47. Netflix now has a market cap of approximately $130 billion. Not bad for a company that offered to sell itself to Blockbuster for $50 million in 2000. Just 13 years later, Blockbuster closed its stores, while 76% of U.S. households now stream Netflix. 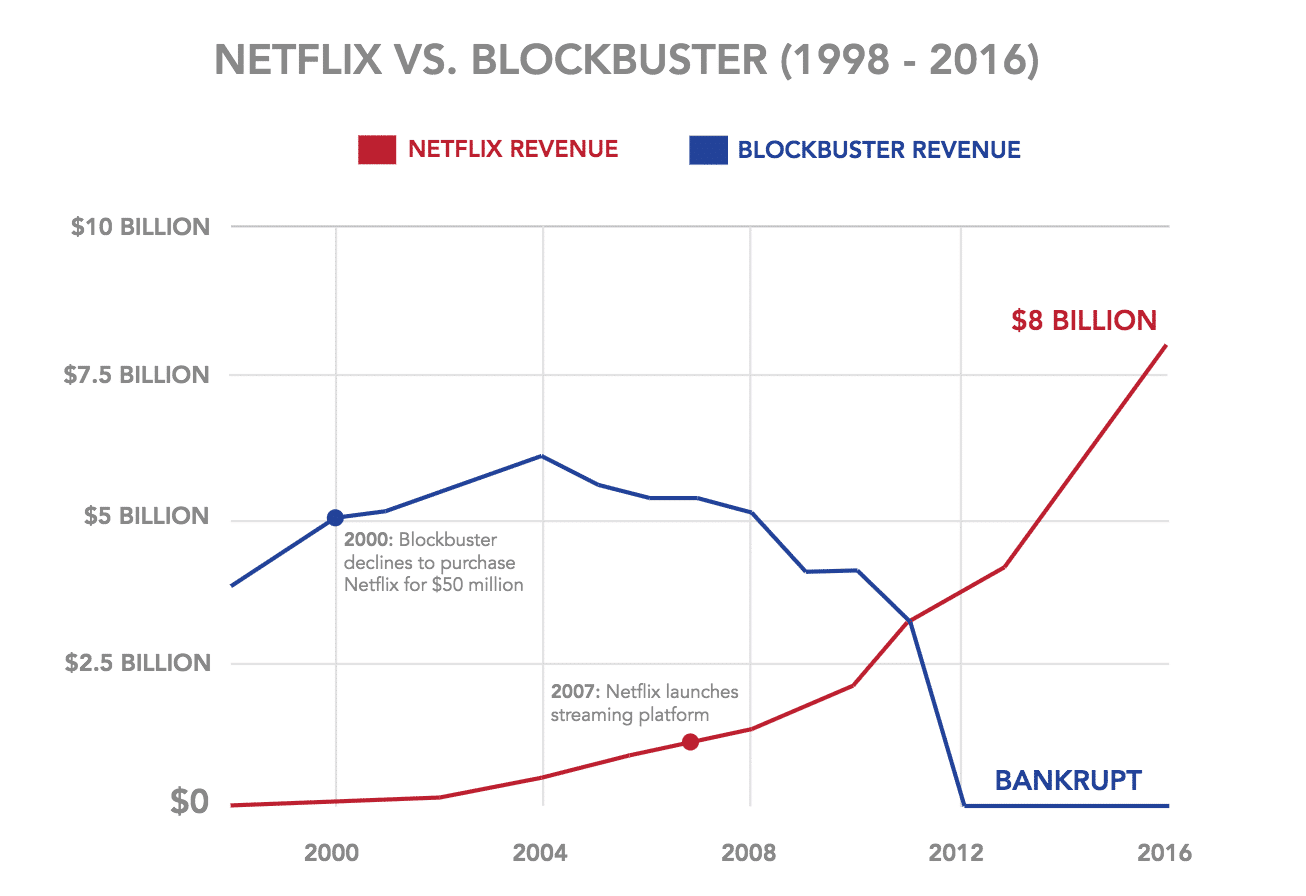 Amazon has the second-highest return of the companies we analyzed. An initial investment of $1,000 in Amazon in 2009 would be worth nearly $22,000 today. That’s not surprising when you consider how much the company has expanded beyond its e-commerce roots. Over the past 10 years, Amazon has entered many new verticals, such as retail, cloud computing, video streaming, delivery services, and robotics.

Even established companies such as McDonald’s, Walt Disney, Microsoft, and Nike have outperformed the S&P 500. These are companies most investors are attracted to for their stability and dividend payout. It goes to show that you don’t always have to take on a large amount of risk to generate a strong return. If you had played it safe by investing in gold or a U.S. 10-year Treasury note, by comparison, you would have significantly underperformed the S&P 500.

Picking stocks isn’t easy. According to an Innosight report, the average company will last only 12 years on the S&P 500 by 2027. That’s why most people are better off investing in index or mutual funds. However, if you have some extra savings you want to earn a return on, it’s OK to invest in individual companies.

Just don’t risk money you can’t afford to lose. For every person who got in early on Apple, there’s a story of someone who lost their money investing in Blackberry.

What’s the best investment you’ve made? Which company do you believe will be the next Netflix or Amazon?