Everyone wants to earn extra money. Just about everyone enjoys sharing their opinions. That’s what makes survey sites — which pay you to complete surveys — so interesting.

Taking online surveys is one of my favorite pastimes. I’m a member at quite a few different sites. Although the extra money is nice, you’re not going to get rich or even replace your day job with online surveys – the money is more icing on the cake rather than the cake itself.

Nonetheless, using survey sites is a great way to have your opinion heard and effect change in the products and services you use. And one of the best is Ipsos iSay. Read on to find out if it’s worth signing up for.

What Is Ipsos iSay?

Ipsos iSay is a market research company that was founded in 1975. The company conducts surveys for major brands, political candidates and parties, and public organizations. It even gauges the effectiveness of public service announcements.

If you take one of the surveys, you are rewarded for your time by way of iSay points, or stars. Most reward redemption options value each point at $0.01, but if you choose the PayPal option, the value of points is slightly lower — likely to cover the cost of PayPal transfer fees.

Although Ipsos iSay only offers surveys as a way to make money today, some reviews suggest it recently underwent an overhaul, cutting previous services out of the loop. Various sources describe a loyalty program where users were paid for brand loyalty, but that doesn’t seem to exist anymore.

The company also brought in a massive audience years ago with a Poll Predictor Facebook game where users would predict the outcomes of polls for rewards. Unfortunately, that Facebook app isn’t live anymore either.

Nonetheless, the company didn’t need all of these bells and whistles. In my review of its current services, I found the crystal clear focus on surveys to be refreshing. This focus makes the website more user-friendly, a rare attribute in the world of online surveys.

How Ipsos iSay Stacks Up

Ipsos iSay isn’t the only website that pays you to complete surveys online. One of the company’s most worthy competitors is Survey Junkie. Check out the table below to see how the two compare.

Ipsos iSay has been around for nearly half a century. Any company that survives that long is the result of hard work, dedication, and at least one or two things that really set them apart. iSay is no different.

As a leader in its industry, it only makes sense that working with the company comes with a few advantages. Some of the biggest advantages to joining Ipsos include:

Ipsos iSay is an impressive paid survey platform, but no company is perfect. Before you sign up, you should consider the following disadvantages.

I spent quite a bit of time using Ipsos iSay while putting together this review, and I can say without hesitation that it’s one of the easiest-to-use survey platforms in existence today. These are some of my favorite features.

Staying with the easy-to-use tradition of the platform, it’s simple to sign up. Just click the “Sign Up” link in the middle of the home page and enter your basic information – name, email, and password – to join Ipsos iSay. Next, check your email to confirm your email address and you’ll see the screen below:

Now, fill out a few more details about yourself and verify your mobile phone number, and you’re in.

When you log in for the first time, your screen will look like the screenshot above, but the profile completion percentage will be 0%. Fill out simple surveys about yourself to bring your profile completion up to 100% and get the best chances of receiving survey invitations.

Surveys Relating to Your Topics of Interest

No matter what survey site you use, chances are you’ll make less than minimum wage for your time. The majority of the benefit of these sites is the ability to share your opinions and play a role in effecting change.

iSay surveys were refreshingly related to my topics of interest. I took three of them and they took between 10 and 20 minutes each to complete, but I never got bored.

Remember the survey completion score above? You have to answer about 20 minutes of questions about yourself to get that score to 100%. By then, the platform knows you pretty well. 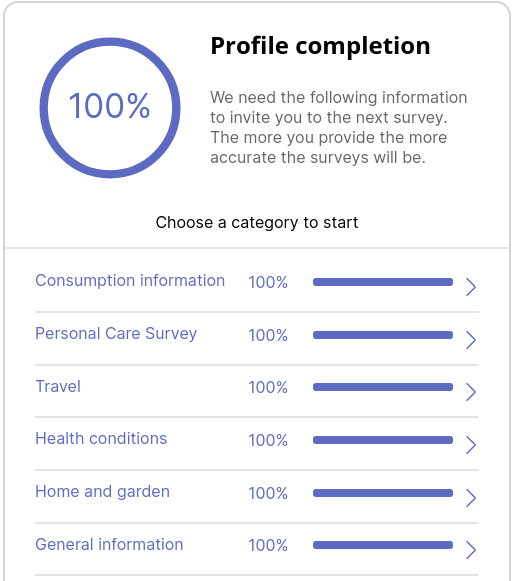 Ipsos iSay has a clean, easy-to-use dashboard. When you log in, you only have four options: Logout, Surveys, My Profile, and Rewards – and every option is right in view. Check out the screenshot below:

There’s a list of available surveys on the survey screen.  Each survey shows the rewards you earn and gives you the option to start. Although I like the survey topics, it is worth mentioning that you don’t know the topic of the survey until you take it. It would also be nice to know how long it takes the average user to complete.

Nonetheless, the simplistic nature of the platform makes it incredibly user-friendly.

For me, rewards aren’t the most important part of being part of the survey community, but they are important nonetheless. And redeeming them is always exciting.

Ipsos iSay works with several leading brands, which gives you the ability to cash in your points for options like Starbucks, Walmart, iTunes, Target, and Amazon gift cards, among others. You can also take advantage of a virtual Visa prepaid card or cash out with a PayPal funds transfer.

You can also cash your points out for a charitable donation to the Ipsos Foundation. If you choose this option, your donation will support global outreach and educational programs for underserved children around the world.

Finally, you can cash your points in for Ipsos Market points where you can find rewards from top retailers at discounted prices.

You earn 100 iSay points for each referral you bring to the platform, up to 60 referrals per month. Although this isn’t the most rewarding referral program in the paid survey market, it’s always nice to make a few extra bucks when you can.

The vast majority of survey sites are geared toward a small, highly targeted audience. That’s not the case with Ipsos iSay. The platform is available in the US, Canada, and more than 100 other countries around the world.

Ipsos iSay is a legitimate survey website. Unfortunately, that’s a question you have to ask in the survey space because there are tons of scams that never pay and may even make money from selling your information.

This isn’t one of those companies.

Ipsos is a global market research company, one of the largest of its kind. The company has more than 15,000 employees around the world and serves customers in more than 100 countries.

The company has a C rating with the BBB, but when you dig to find out the reason, it’s because the company failed to respond to one complaint. That’s not bad for a company that serves thousands of companies, political candidates and parties, and public organizations, plus countless survey takers around the world.

The bottom line is that Ipsos is one of the largest data aggregation and survey companies in the world. That doesn’t happen if the company is managed by a group of fraudsters.

Ipsos iSay isn’t the only paid survey site online. There are tons of other survey websites to consider. Check out the table below for information on other popular options.

Online surveys are a great way to have your opinions heard and earn a little extra cash for taking the time to share them. If you’re thinking about getting involved, you should strongly consider signing up with Ipsos iSay.

The platform is easy to use, surveys are refreshingly relevant, and the rewards are worth tapping into. There’s no question that it’s one of the best survey sites online today.

What are the best paid survey sites to earn extra cash and gift cards?

What are the best ways to make money from home?