When Is the Best Time of Year to Buy Large Appliances? – 12 Tips...

How to Keep Your New Year’s Resolutions by Using S.M.A.R.T. Goals If you have lofty ambitions for the coming year but are worried about setting yourself up for disappointment, you need to know how to create resolutions that will work for you. Reasonable and actionable goal-setting can propel you toward the future you desire.

Americans often approach their New Year’s resolutions as lofty ideals rather than goals to set and meet. But lofty ideals aren’t effective behavior modifiers. And behavior modification, more than anything, is what will help you harness your ambition and actually reach your desired destination in life.

For instance, anyone can say, “I want to be a better person in the new year” or “I want to lose weight so I can feel better about myself.” However, these classic resolutions have very few application points for the everyday behaviors that make a difference in the long run.

It’s better to approach New Year’s resolutions as attainable goals rather than vision statements for your future. It’s completely acceptable to resolve to be a better person, but that resolution without accompanying goals is unlikely to move you from your couch and into action. If you set reasonable and clear goals, however, you’re far more likely to modify the behaviors that will help you fulfill your vision for the future.

Consider the difference between these two statements:

The goal is different than the resolution because it’s specific, measurable, attainable, realistic, and time-limited (S.M.A.R.T.). Statistically speaking, you’re far more likely to lose 15 pounds with the goal than you are to lose any weight with the resolution. You can still make New Year’s resolutions, but if you want resolutions with staying power, you need to break them down into S.M.A.R.T. goals.

Characteristics of a S.M.A.R.T. Goal

A firm goal has the following S.M.A.R.T. characteristics: 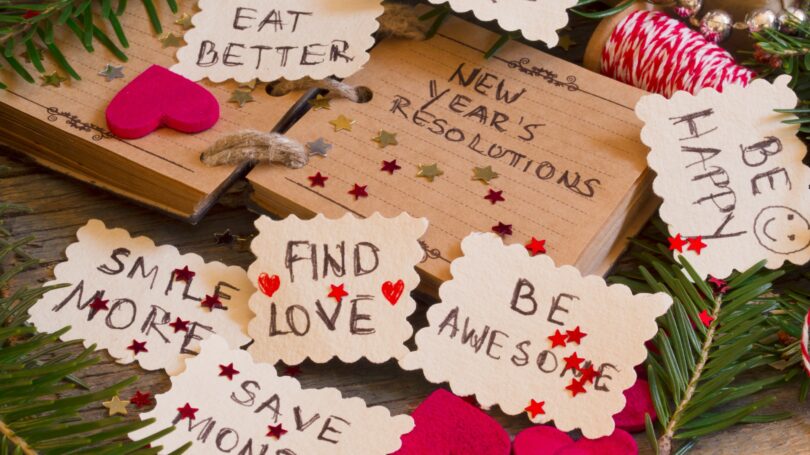 Here are three examples of how to turn typical New Year’s resolutions into S.M.A.R.T. goals with staying power.

On January 1, many Americans resolve to get out of debt. The problem is that debt comes in many forms, and debt problems are often so complex and overwhelming that people can lose hope quickly after setting the resolution. However, the resolution can be less overwhelming when it’s turned into a S.M.A.R.T. goal.

Instead of simply resolving to “get out of debt,” a savvy goal-setter specifies the type and amount of debt, as well as the behaviors that can lead to goal attainment. A S.M.A.R.T. goal might be, “I will reduce my credit card debt by $2,500 by March 15. I will do so by applying all of my commission bonuses to the balance, rather than making minimum payments each month.”

Similar to debt, many Americans are overrun by household clutter that’s both stressful and unsightly. Rather than resolving to “declutter the house,” a S.M.A.R.T. goal-setter might say, “I will reduce the clutter in my house by emptying my home office of everything I haven’t used in the last three months. I will complete this task by mid-February.” Once this goal is met, the goal-setter can create an additional goal to tackle other rooms in their home.

Rather than saying, “I’m going to quit drinking this year,” a S.M.A.R.T. goal-setter puts some serious thought into how to create a realistic and attainable goal. If there is any kind of addiction to alcohol, they need to account for the necessary support and medical services.

A better goal, in this case, would be, “I will see my doctor within one week for information about rehab, and I will visit local Alcoholics Anonymous meetings weekly. By completing these tasks, I will remain sober for 30 days, and I will reassess my progress on January 30.”

It’s easy to become an idealist when the new year rolls around, but it’s important to remember that New Year’s resolutions are ultimately a tool to help you grow into the person you want to be.

Take some time this New Year’s Eve to really consider who you want to be in the future, and then employ S.M.A.R.T. goals to help you fulfill your vision. Making a resolution to live your life with purpose and passion is a beautiful and exciting thing, not something to dread.

What has helped – or hindered you from – attaining your goals?

Mary McCoy
Mary McCoy, LMSW is a licensed social worker who works closely with individuals, families, and organizations in crisis. She knows first-hand how financial choices can prevent and mitigate crises, and she's therefore passionate about equipping people with the information they need to make solid financial decisions for themselves and their loved ones. When Mary isn't on her soap box, you can find her hiking, jogging, yoga-ing, or frolicking with her family.