8 Ways to Save Money When Buying Tires for Your Car

8 Money Lies That Damage Your Finances & Hurt Your Marriage They say that what someone doesn’t know won’t hurt them. Unfortunately, when it comes to money, this sentiment doesn’t apply.

I remember when my husband and I were newlyweds. I continued my habit of shopping, but would nest the shopping bags, each one into another, so it only looked like I brought home a single bag. One day, my husband wanted to see what I had purchased – and watched in horror as I started pulling out bag after bag. Not only was he annoyed that I’d tried to hide my shopping from him, he was even more perturbed when he realized that I’d been doing it for months.

A poll by Forbes found that 31% of spouses admitted to telling money lies in their marriage. Whether it’s to avoid getting into a dispute or to purposely keep your spouse in the dark, lying about money can do serious damage to your relationship, to your bank accounts, and to both of your credit scores. Even small, seemingly harmless lies can set you up for major fights in the long run.

Learn from my mistakes and avoid telling these little white money lies that hurt your finances and your marriage:

1. “This? It Was $50”
I’m definitely guilty of what my husband calls “rounding down.” It doesn’t matter if it was $50 or $500, I sometimes round down the amount to the nearest $10 or $100 increment to make the price seem easier to swallow. While the difference between $50 and $59 might not seem huge to you, it can throw off your entire budget, especially if you do it repeatedly. Here are your choices: Either find an item that’s closer to the price you plan to tell your spouse, or keep your receipts and show them to your spouse.

2. “Our Bank Account Looks Fine”
Let’s face it: Money wars are the pits – and since financial issues can be a serious part of marital discord, it’s tempting to cover up a low bank balance by purposely inflating the numbers. If you are entirely in charge of finances, it can be even more tempting to keep your spouse in the dark, even if you’re in deep financial trouble.

That’s why it’s so important to take a team approach to finances. You’re equal partners, so you should both have access to accounts. You’ll be less likely to gloss over a low bank balance if you know your spouse can check it any time. This also means you can work together to return your account balance to an acceptable level.

3. “What’s Mine Is Yours”
Sharing funds is fine – as long as you can do it without begrudging each other. If one spouse works and the other does not, the spouse who works has to be entirely comfortable with the fact that you’re both spending from the same pot. If not, it could cause serious resentment issues.

If you are not okay with your spouse spending shared money, it might be time to consider using separate bank accounts. Furthermore, it’s important that you disclose all of your accounts to your spouse – no squirreling away secret funds that he or she doesn’t know about. If you’re going to save, save together.

4. “I Paid That Bill on Time”
Occasionally, time just gets away from me, and it’s not until I receive a friendly reminder from the electric company that I realize I completely forgot to pay the bill. That’s when I have to be honest when my husband asks, “Hey, did you pay the cable company?” While it’s tempting to answer “yes” and then pay it off as quickly as possible before he assumes otherwise, I don’t want my spouse to have any surprises down the road – such as damage to our credit history. 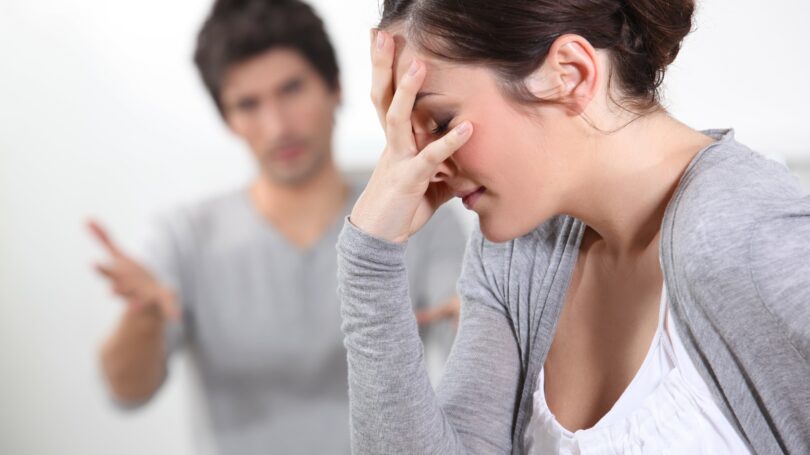 5. “It Was on Sale”
Lying about a purchase to make it sound like it was a great deal can have a huge negative impact on your finances – and often, you are lying to yourself as much as you are to your spouse. I always consult my husband before making a major purchase, even if it’s for an item on sale. If I’m in the store, I’ll have him search online for a superior deal. Teamwork can net true savings, and those are far superior than those that you invent.

6. “Of Course We Can Afford It”
Imagine that you’re dying for a new HDTV. Your wife is worried about the finances, so you tell her not to worry – you can afford it. While it may help you convince her to agree to your desired purchase, it’s not a wise financial move.

Maintaining a household budget should be a team effort, and sticking to one should involve both you and your spouse. Before offering ambiguous statements about what you can and can’t afford, it’s a good idea to sit down together, check your accounts, and make a joint decision about whether to follow through with major purchases.

7. “We Can Afford the Debt”
Remember that going further into debt is almost never a good idea. Even if you check out your budget and notice that you have a little wiggle room, the only “good” debt is that which involves an asset that appreciates over time. For instance, using debt to buy a home within your means is a good idea. However, using debt to buy a flashy car that you can’t really afford is not smart. Telling your spouse that you’ve budgeted for a certain amount of debt is misleading to you both.

8. “What Bill?”
Ever caught yourself deftly chucking a bill in the garbage before your spouse gets home from work? That’s pretty much lying by omission. Whether you’ve overspent on your credit card or have a seriously high cell phone bill, hiding the end result from your spouse means you either live with the guilt or get busted eventually. While it might be difficult, you’re better off coming clean and owning up to the oversight instead of letting a hidden bill contaminate your marriage.

No marriage is perfect. I’ve been married for 10 years, and we’ll still have the occasional money-related argument. Still, the secret of success starts by never keeping money secrets. As a married team, it’s up to both of you to come clean about your spending habits so you can iron out wrinkles that could disrupt your budget – and your marital bliss.

Have you ever told your spouse a money lie?

Jacqueline Curtis
Jacqueline Curtis writes about edtech, finance, marketing, and small business strategy. With over 14 years of copywriting experience, she's created content and scripting for organizations such as GE, Walgreens, Overstock, and MasterCard. She lives in Utah with her husband, three kids, and an overzealous springer spaniel named Penelope.