For years, the traditional 401(k) plan has been the most popular workplace retirement account. However, there’s a new alternative that’s been growing steadily in the past decade: the Roth 401(k). According to data from global advisory, broking, and solutions company Willis Towers Watson, 70% of employers who have a 401(k) plan offered a Roth version in 2018, up from just 46% in 2012.

If your employer is one of them, you’ve probably wondered which type of plan is better. As with so many financial questions, the answer is, “It depends.” To understand just what it depends on, you’ll need to dive into some details about how the Roth 401(k) works and what sets it apart from its traditional cousin.

A Roth 401(k) combines the convenience of a traditional 401(k) with the tax benefits of a Roth IRA. Here’s how it works:

Pro Tip: If you have a Roth 401(k) or traditional 401(k) through an employer, make sure you sign up for a free analysis from Blooom. They’ll make sure you have the right allocation and are properly diversified. They also analyze the fees you’re paying. Sign up for your free Blooom analysis.

The biggest difference between a traditional 401(k) and a Roth 401(k) is the way they are taxed. There are also some differences in the rules governing how and when you can withdraw money from them and what happens if you withdraw money early.

However, in other ways, the two plans are very similar. Here’s a quick rundown of their features and the similarities and differences between them.

There’s also no income limitation on either the traditional or the Roth 401(k). You can contribute to either type of plan no matter how much you make.

Both traditional and Roth 401(k) plans shelter some of your income from taxes, but they do it at different times. With a traditional 401(k), you pay no tax on contributions, but you pay taxes on your withdrawals in retirement – precisely the opposite of a Roth 401(k). So choosing between a traditional and a Roth 401(k) is largely a matter of deciding which matters more to you: saving money now or having more money later.

Some experts argue that it makes sense to contribute to a traditional 401(k) if you think your tax rate in retirement will be lower than it is now. For instance, if you’re currently at the peak of your earning power, you probably expect to have a lower income in retirement and thus pay less in taxes. By contrast, if you’re a young worker on a starting salary, you probably assume that your income and your tax rate will be higher in retirement, so it makes more sense to pay your taxes up front with a Roth 401(k).

Unfortunately, predicting how your tax rate will change in retirement isn’t quite that simple. You can’t know exactly what your income will be in the future or how the tax system will change between now and your retirement. For example, many economists argue that tax rates as a whole will need to rise at some point in order to pay for the growing cost of programs such as Medicare and Social Security. If that happens, people who invested in traditional 401(k)s could find themselves paying much higher taxes in retirement than they would have paid during their working years.

Instead of trying to guess your future tax rates, it makes more sense to think about how much you can afford to invest right now. One thing is certain: If you fund your 401(k) plan up to the maximum, you’ll end up with more money by choosing a Roth 401(k). Both plans will contain the same amount of money when you retire, but with a Roth, all that money will be tax-free. (To see how the math works on this, check out the retirement calculator from American Funds.)

However, if you can only afford to give up a certain amount of your take-home pay each month  – say, $500 – you’ll end up with more in your account by choosing a traditional 401(k) plan. That’s because the entire $500 you can afford to contribute will go into your plan, with none lost to taxes. (To see how this works, check out the 401(k) calculator from CalcXML and select “Option 1” under “Show All Input.”) Of course, you’ll have to pay tax on the money when you withdraw it, but you can adjust the amount you withdraw per year to keep your taxes low. 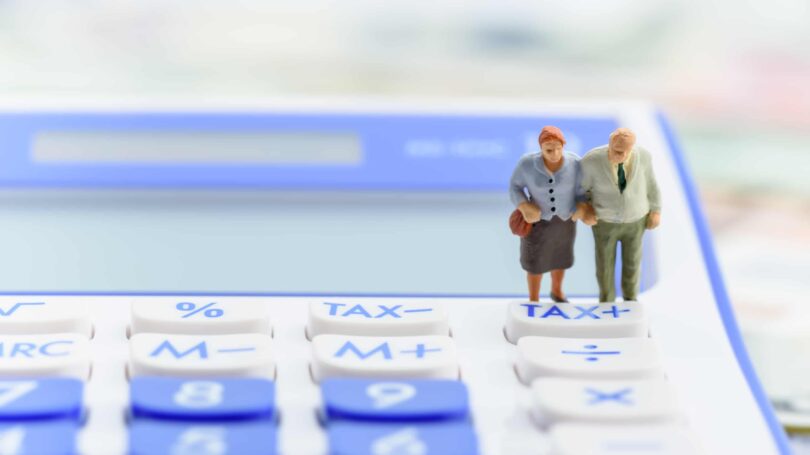 One major perk of a 401(k) as a way to save for retirement is that most employers match a portion of your contributions. For instance, your employer might agree to contribute $0.50 for every dollar you contribute, up to 6% of your salary. So if you’re making $60,000 and you contribute 6% of that, or $3,600, your employer puts in $1,800. Your employer’s contribution does not count toward your $19,000 maximum for the year.

Both traditional and Roth 401(k) plans allow employer matching. However, even if you’re using a Roth plan and funding it with after-tax dollars, your employer always contributes pre-tax dollars. So if you have a Roth plan, contributions from your employer go into a separate account that’s treated like a traditional 401(k). When you withdraw money from this secondary account in retirement, it’s taxed as ordinary income.

With a traditional 401(k) plan, you can start withdrawing money as soon as you reach age 59½. You can withdraw money earlier than that if you become disabled or if you die and your account passes to your beneficiary. There are a few exceptions that let you take early withdrawals for other reasons, but in general, you must meet these rules or pay a penalty.

A Roth 401(k) has these same limits on withdrawals, plus one more: You can only withdraw money from your Roth account tax-free if you’ve had the account for at least five years. If you opened the account more recently, your withdrawal is not a “qualified distribution,” and you must pay taxes on the money.

When you withdraw money from a traditional 401(k) early, you pay a penalty equal to 10% of the withdrawal, in addition to any tax you owe. With a Roth 401(k), by contrast, the tax and penalty are due on only part of the money.

Your Roth 401(k) account has two kinds of money in it: the money you’ve contributed and the earnings on your investments. The contributions have already been taxed, but the earnings have not. When you take an early withdrawal from your Roth 401(k), part of the money comes out of your contributions, and you do not need to pay tax on it. The rest of the withdrawal comes out of your taxable earnings, so it is subject to tax and the 10% penalty.

It’s also possible to avoid taxes and penalties completely by rolling over part of the money in your Roth 401(k) to a Roth IRA. As discussed below, the rules for withdrawals from a Roth IRA are different, allowing you to withdraw as much as you’ve contributed with no tax or penalty.

Unfortunately, you can’t let money keep building up tax-free in your 401(k) account forever. Once you reach age 70½, you must stop putting money into your account and start taking money out. Each year, you must withdraw a specific amount, known as the required minimum distribution, or RMD.

Both traditional and Roth 401(k)s require RMDs. However, both types of plans allow you to delay taking RMDs if you’re still working at age 70½. In that case, you can put them off until you retire. However, you must be working for a company that you don’t have an ownership stake in, meaning that you don’t own 5% or more of its stock.

Like a Roth 401(k), a Roth IRA plan allows you to withdraw your money tax-free after you retire. However, these two plans are quite different in other ways. A Roth IRA has different rules for contributions, income limits, and withdrawals.

Pro Tip: If you want to set up a Roth IRA, you can do so in minutes with a broker like You Invest by J.P Morgan or a robo-advisor like Betterment.

Although Roth 401(k) plans are becoming more common, there are still many companies that don’t offer one. Some employers would rather not deal with the cost and hassle of having two different types of plans, including all the work required to educate their employees about the difference between the two.

However, according to MarketWatch, businesses are much more likely to offer a Roth 401(k) option if their employees say they would use it. So if you think this type of plan is for you, but you don’t currently have access to one, tell your employer. The more employees ask for a Roth 401(k), the more likely the company is to offer one in the future.

Dividend Reinvestment Plans (DRIPs) – What They Are & Why to Invest