6 Types of Common Craigslist Scams to Watch Out For Earlier this month, my wife and I were proud to fulfill a promise we made to ourselves some time ago, which was to build a playground for our kids. It was truly amazing to see it all come together after months of planning and saving.

Between myself, my father-in-law, and a couple of neighbors, we all worked together for one week, a few hours a day, to complete the job.

Later in this article, I’ll discuss the many factors that influenced our decision to build, but first, take a look at how the playground progressed from concept to reality:

We also needed sheet metal and galvanized pipe for the monkey bars.

The building plans specified how many pieces of each type to buy. We received quotes from two major local home improvement stores in the area, and we picked the store that was $75 cheaper overall.

Following the directions and blueprints, we put together the frame and had it up by the end of the first day. I did not have all the tools required to do the job myself, but my neighbors had what I was missing. The frame required holes to be drilled and the 4×4’s to be cut at a 35-degree angle at the top.

After the frame was up, we built a deck on the second floor and attached the slide and the ladder.

We also inserted the tower walls to prevent the structure from falling apart.

Even though at this stage it was not yet finished, the playground was “playable” by the kid’s standards.

But before they could, as adults, we needed to “test” it first (this was actually pretty fun!).

The roof was the most dangerous part of the construction. We built the roof on the ground first and then hoisted it up on top of the frame. This required four people and we still almost dropped it. In retrospect, we should have read the directions more carefully when it said to build the roof in place. The monkey bar addition was less frightening.

For the finishing touches, we made a sandbox out of the bottom area under the slide. We also attached the swings and the trapeze bar to the monkey bar frame. The last step was to put cinder blocks under the end of the slide to raise up the bottom of it. 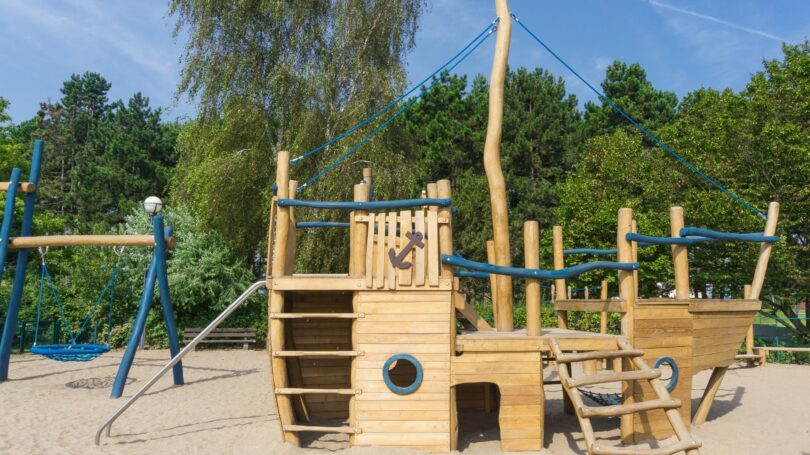 Was It Worth It?

With the playground now finished, we can sit back and watch our kids get the full enjoyment out of it. Without a doubt, my girls are spending more time outside now than ever before. I am thrilled with the results and I am glad that we made the decision to build if after considering all of the following advantages and disadvantages:

1. Cost
Pre-built playground can range in cost from $300 to over $4000 depending on how big you want it. Building it yourself gives you way more size for less dough. Ours might have been in the $2000-$3000 if purchased at a store with installation included.

2. Location
Nothing’s better than having the “park” in your own backyard. There’s no need to drive a few miles away anymore just to sit and watch your kids play. Now you can send them outside while you relax comfortably inside. Plus, you can check on the kids simply by looking out the window.

3. Entertainment and Social Life
My kids used to go to their friends’ houses to play games or hang out. Now, all the neighborhood kids come over to our house instead and we know exactly what our kids are doing. And better yet, when we host the next birthday party at our house, we can send them all outside to burn off their energy after we sugar them up.

4. Features/Changeability
Building your own playground means that you can customize it to your particular needs. My girls love those swings. Had they have been younger, we might have installed baby-swings. When they get older, they might want a chin-up bar and I can install one then. There are countless combinations to the ways we can continue to transform the playground.

5. Expansion
We are already making plans to expand this playground. The expansion will consist of a second tower with a bridge connecting the two together. A tube slide will extend from the front and a rock wall with climbing ropes in the back. The final touch will be a new arm off the back of the first tower for a large tire swing. The expansion should cost an additional $700 but will add a ton of “playability.”

6. Pride
Knowing that the playground was built with our own hands puts a huge smile on my face. Even better, seeing the kids having fun fills me with a joy I could not get if I had bought it and simply had it installed. We are also very proud that we saved up money first and didn’t go into debt to but the materials and build the playground.

1. Potential Liability
A neighborhood kid could get hurt while playing on your playground. Children do risky things like jumping out of the swings or sliding down head first. It makes sense to check on them often and lay out ground rules.

2. Time and Skill
For a construction novice like me, getting it up in a week could not have been achieved without help from our neighbors. Thankfully we have generous friends who volunteered their time and their tools. Unless you build things regularly, don’t expect to have it all done in a single weekend.

3. Kids grow up
Inevitably, my girls will outgrow this playground and will be wanting cell phones and car keys. When that time comes, what will become of our handiwork? Instead of tearing it down, I’d rather look for someone I can donate it too. This could be time-consuming, but would be worth it to help out another family or even a charity.

4. Maintenance
I’m told that after about a year, I’ll need to paint or stain the playground. This is because the pressure treated wood will start to look a little gnarly after it has been weathered.

One of the greatest joys of parenting is seeing your children having fun. A playground in the backyard is a great source of fun that lasts a very long time. Building the playground yourself is a much better financial deal than buying one if you have the time, the tools, and the help.

If this is a project you’re interested in, your first step is to get some building plans. I purchased the blueprints and the complete set of instructions for the above playground for $32 at Build Your Own Playground. I can’t think of a better way to spend a week.

And if you’re looking for some smaller DIY projects, check out these other easy DIY projects to budget and save money.

Have you built a playground before? Would this be worth the time and effort for your family?

David Bibby
David Bibby currently lives in Palm Bay, FL with his wife Catherine and two daughters. David is a Christian, writer, and programmer. He became interested in personal finance at age 20 while working for a credit union. He owns and operates numerous websites on topics ranging from finances to marriage help.

6 Types of Common Craigslist Scams to Watch Out For

What Is a Living Wage? – Minimum Income for Basic Needs Above Poverty