Few people are aware that, in 2008, Igor Panarin, dean of the Russian Foreign Ministry’s academy for future diplomats, predicted that the United States would break into four separate countries in 2010.

He believed that the national and regional effects of the recent recession, and the people’s dissatisfaction with the status quo and the Federal Government, would result in the creation of five distinct, autonomous, political regions.

Panarin divided the U.S. into these new republics:

While Panarin’s prediction was wrong, or perhaps premature, he was right in identifying regional clusters of dissatisfaction, and their desires for change. For example, California voters are considering a proposal by venture capitalist Tim Draper to split the large state into six smaller units, so that “people will be closer to their state governments.” If implemented, the region would have 10 more senators.

Another venture capitalist, Peter Thiel, co-founder of PayPal, has funded the development of floating cities in international waters off the coast of California which would assume a libertarian form of government completely outside U.S. control. In Thiel’s view, these cities would be free of regulation, laws, and moral conventions. They would provide no welfare, impose no minimum wage, and have loose building codes and few restrictions on weapons. While such efforts may be considered extreme by some, they reflect an underlying sentiment that is very real.

While California would need congressional approval to divide into smaller units, Texas may not actually have that same restriction. Some people argue that within the terms of annexation, when the Republic of Texas joined the Union in 1846, there exists a right reserved by the state to split into five smaller states. This theoretical transformation would allow the resulting region to have 10 senators, rather than two – and eight more electoral votes.

Like America itself, Texas is a true melting pot – and the many diverse cultures represented throughout the state seem to have produced a bizarre mix of apparent contradictions:

To many people, especially those of a conservative bent, Texas is the model for ideal government. Certainly, its economic performance during the recession is subject of great envy. The state claims to be number one in job creation since then, accounting for one-third of net new jobs nationwide – a claim PolitiFact judges to be valid. Governor Rick Perry wrote in “The Washington Times” on July 29, 2009 that the Texas approach of minimal government has led to “balanced budgets, low taxes, a predictable regulatory climate and a fair legal system.”

However, critics point out that the Texas constitution requires the legislature to balance its budget every year without borrowing from future receipts. They also note that the lack of a state income tax results in excessively high property and state sales taxes – both of which unfairly burden low-income earners and retired seniors.

Other criticisms include the state’s deteriorating infrastructure, lack of adequate regulatory oversight, excessive insurance and utility rates, and local and county debt loads, which have exploded due to the state’s lack of funds for necessary programs. They also point to the declining educational funds per student (43rd in the nation, according to the Dallas News), the impending water crisis, and the incarceration rate, which, according to a study, was the highest in the world as of 2000. State leaders have also aggressively advocated for the repeal of the Affordable Care Act, turning down federal funds to expand Medicaid. As a result, Texas leads the nation in the number of uninsured citizens.

Republicans have controlled the Texas state legislature and major political offices for years, reflecting the conservative nature of the voters and the power of the state’s rural constituency. In 2014, Republicans lurched further right with Tea Party candidates winning nearly every major race in the Texas primary. This has resulted in one of the most conservative governing bodies in the 50 states.

As more conservative Tea Party candidates are elected across the country – in 2014, Majority Leader of the House Eric Cantor was defeated in Virginia’s seventh congressional district by a Tea Party-endorsed newcomer – it would not be outside the realm of possibility to see the Federal Government eventually begin to resemble the government now in place in Texas.

The Texas Republican Platform boasts many goals that may find sympathy with Americans who see government as an impediment, rather than a tool, of the people. Among the 289 topics included in the platform are the following highlights:

The Federal Government Under the Texas Model

If the goals of the Texas Republican Platform are realized and the Tea Party is successful in gaining control of the presidency and both houses of Congress, we could ultimately see the following changes across the nation.

Due to the fears and financial vulnerability resulting from the growing national debt, there is a strong likelihood that a Balanced Budget Amendment limiting expenditures to federal revenues would be passed. As a consequence, government services would be severely cut back, especially in regulatory agencies, such as the Departments of Education, Energy, Health and Human Services, Labor, and Transportation. The Environmental Protection Agency, Federal Drug Administration, Office of Equal Opportunity, and Security and Exchange Commission, as well as the power of the Federal Reserve and the Internal Revenue Service, would be greatly restricted.

Budgets for such programs as NASA, Export-Import Bank, and other esoteric programs would be cut. As a consequence, federal deficits would disappear and debt would decline. Responsibility for many services such as education and business regulation would return to state governments.

The U.S. would likely move to a more isolationist policy similar to that followed before World War II. The country would not engage in foreign wars or police actions, nor maintain government facilities outside the boundaries of the United States. Accordingly, the president’s power to take action without prior congressional approval would be restricted.

Defense, however, would continue to dominate domestic spending with an emphasis on border protection, terrorism, and the development of technological weapons with worldwide strike capabilities. Powers of the National Security Council would be expanded, not restricted, for increased surveillance of citizens to ensure domestic tranquility and safety (while this action may offend the anti-government faction of the Tea Party, it reflects the greater view).

Longstanding environmental regulations would be rolled back, encouraging mineral exploration and energy independence through expanded off-shore drilling and use of domestic coal and oil shale resources. Responsibility for business regulation would move increasingly to individual states. Workers rights to organize would be restricted with a national right-to-work law, and the minimum wage would be eliminated.

Entrepreneurship would be encouraged through tax advantage and public finance, even as consumer protections are rolled back, including the most recent bankruptcy and credit controls. The Federal Government would cease to support the housing market with direct guarantees, and the provisions of Dodd-Frank would be substantially weakened.

Affirmative Action would be discontinued on a federal level, while the definition of “marriage” would be unequivocally decided on a state level. Gun ownership rights would be expanded, as would justifications for using weapons to protect life and property.

Federal penalties for the use, sale, or transportation of illegal drugs, excluding alcohol, would be expanded. Rights for women, homosexuals, and minorities would recede as a national sense of orthodoxy replaced toleration for difference. Abortion for any reason would be outlawed, and the rights of a fetus expanded. Congress would reduce the barriers between church and state, specifically recognizing the United States as a “Christian” nation.

The United States is in the throes of a historic political change, and the rapidly expanding federal debt and effects of increasing ideological division are sure to turn our political focus to domestic issues over the next decade. However, while the scenario described here is possible, it is hardly likely.

Americans have shown time and again that they collectively reject extremes on both sides of the political spectrum. The Tea Party and its conservative views have been welcomed in Texas – but it is less clear whether those views can find acceptance in the broader national electorate. As a multi-generational Texan, I certainly hope not.

Do you advocate for a United States of Texas? 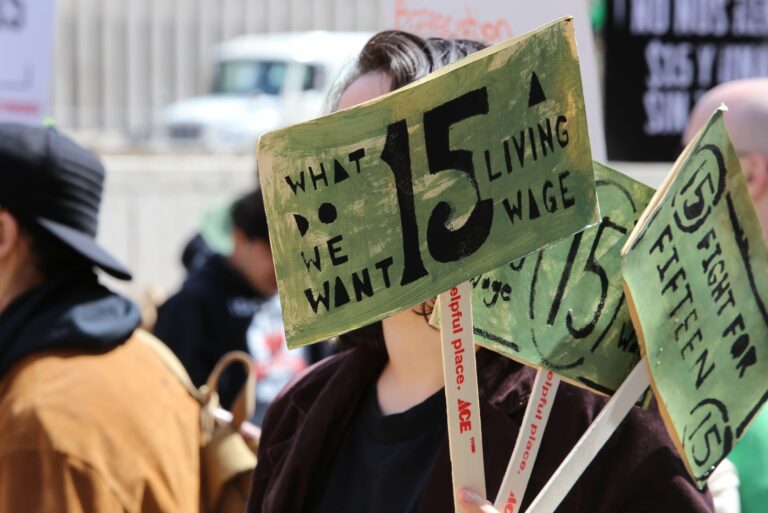 Economy & Policy Should the Minimum Wage Be Raised to $15? - Pros & Cons to Consider
Related topics

What is Wall Street?

What states have the lowest overall tax burden?

What is the average income in America?